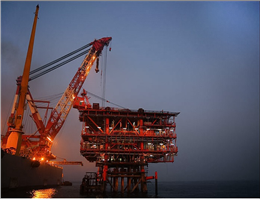 According to MANA, Golshenas made the remark in an interview with reporters on the sidelines of ceremony for installation of the SP Platform B18.
He referred to the speech of President Hassan Rouhani to ceremonies marking the 50th Anniversary of the Establishment of the National Iranian Gas Company (NIGC) regarding increase in recovery from SP gasfield.
"I am so happy to install platform B18 successfully on behalf of the Ministry of Industries, Mines and Trade, Iranian Mines & Mining Industries Development & Renovation (IMIDRO), and the operating company of Iran Shipbuilding & Offshore Industries Complex Co (ISOICO) as the body in charge of the platform construction," he added.
He said the platform was installed while observing safety standards. "The designing, construction, commodity supply and installation of the platform were all done by the domestic experts."
He added that ISOICO's optimal use of domestic potential for building platform B18 indicates the Company has fulfilled its mission well as subsidiary company of the Ministry of Industries, Mines and Trade and the IMIDRO.
0
Visit Home
Send to friends
Print
Newsletter
Share this news