Hundreds of fishermen in a small port in Vietnam protested the construction of a new terminal for cement exports, to display their dissent against the action. 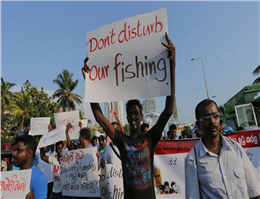 According to MANA and local reports, hundreds of fishermen protested against the government developmental plan to support the terminal under construction by Vissai Group which leaded to a clash between the protesters and the police, and several protesters were beaten; some were taken to the hospital for treatment.
The new export facilities are planned to support a cement plant for the Vissai Group, and will have a capacity of four million tons per year. Vissai received a loan for the terminal from state-owned development bank BIDV in February.
The fishermen claim that the terminal will displace them and damage their livelihoods. They have rejected a government offer of compensation, which ranged from $200 to $2000 each depending on fishing vessel size.
Vissai Cement operates five plants with millions of tons of exports per year (as of 2015). CEO Hoang Manh Truong told Vietnam's Bizhub last year that his focus is on "production capacity, product quality, [and] delivery schedule," citing specifically the investment in the new port facility and the increase in export capacity it will bring.
0
Tags: fishermen port protest vietnam
Visit Home
Send to friends
Print
Newsletter
Share this news