since 2014 ,Phases 17 and 18 of the South Pars Gas Field Injected over 9.5 billion cubic meters of sweet gas to the national gas distribution network. 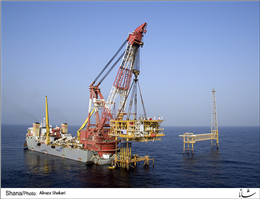 According to MANA,Hassan Boveiri said that installation of two offshore platforms and drilling of 22 wells as well as construction of a refinery for processing the recovered gas the two phases was carried out by 2015.
He said since January 2015, 9.5 bcm of gas, 6 million barrels of gas condensate with export of 4 mb, 82,000 tons of ethane, have 135,000 tons of propane have been recovered from the two phases which have fetched the country $1.5b in revenues.
Boveiri further said that platforms 17B and 18B of the phases will also be launched under the second section of the phases' development projects to add 56 mcm/d to their production capacity.
He hoped the two platforms will come on-stream by February 2017
0
Visit Home
Send to friends
Print
Newsletter
Share this news