The Panama Canal Authority has confirmed one contact of a vessel with one of the locks and refuted reports that there have been two collisions in the newly expanded Panama Canal. 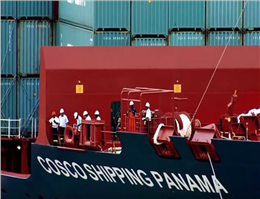 According to MANA, the 8,500-TEU container ship Xin Fei Zhou hit a wall while transiting the locks at Agua Clara on the Atlantic side of the canal last month.
The Authority cited bad weather as the cause, but denies reports of two other accidents where vessels hit fenders. Contacting fenders during approaches to the locks or inside the chambers of the locks is normal and it is the reason for installing fenders on areas where contact is expected, says the Authority, claiming that the way incidents involving the Lycaste Peaceand COSCO Shipping Panama were reported was incorrect.
A study published earlier this year by the International Transport Workers’ Federation (ITF) released claimed that the dimensions of the new locks are too small to be safe in some circumstances. The Panama Canal Authority, however, dismissed the report.
Since the Expanded Canal opened for business, major liners have rerouted service to the Panama Canal to take advantage of the significant time savings the waterway provides. For example, the 2M Alliance, which includes shipping liners Maersk and Mediterranean Shipping Co., announced in July that they are rerouting Asia to U.S. East Coast service to the Panama Canal.
“We are very pleased with the first month of operations at the Expanded Canal since the Inauguration,” said Panama Canal Administrator and CEO Jorge L. Quijano. “The increasing demand is further evidence of the maritime industry’s continued trust in the Expanded Canal, and the great impact it will have on the future of world maritime trade.”
It's worth to be mentioned that the Expanded Panama Canal has transited 69 Neopanamax vessels since the Inauguration on June 26, 2016. Specifically, 40 container ships, 24 LPG carriers, three vehicle carriers and two LNG carriers have transited the Expanded Canal. In addition, the Panama Canal has received 250 reservations and counting for the Expanded Canal, including seven cruise ship reservations.
Milestone transits for the Expanded Panama Canal include:
June 26 – Inaugural transit and container ship: COSCO Shipping Panama
June 27 – First LPG carrier: NYK Lycaste Peace
July 6 – First vehicle carrier (RoRo vessel): NYK Iris Leader
July 25 – First LNG carrier: Maran Gas Apollonia
0
Tags: expanded panama canal locks transit refutation
Visit Home
Send to friends
Print
Newsletter
Share this news