The ferry Sewol, which went down in 2014 with the loss of more than 300 lives, came one step closer to returning to the surface on Friday when salvors briefly lifted her bow, the most difficult and risky step in the salvage plan. 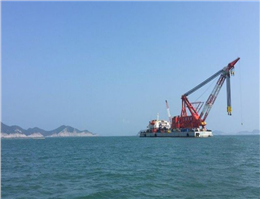 According to MANA, Oceans and Fisheries Minister Kim Young-suk said that a team from Shanghai Salvage raised the bow by five degrees to install nearly 20 steel lifting beams underneath. Next, they will repeat the process at the stern; once all beams are in place, the salvors plan to lift the vessel whole using a combination of air bags, the buoyancy of the ship’s own pumped-out ballast tanks, and vertical lift from a floating shearlegs. The attempt at a whole-ship recovery in over 120 feet of turbulent water may be without precedent, said a naval architect involved with the salvage; he gave the operation an 80 percent chance of success.
The operation has been delayed multiple times due to adverse weather. It was originally scheduled for the beginning of May, but poor underwater visibility, difficult currents and wave action on the surface have slowed the effort.
Kim Hyun-tae, a senior official, speaking at a press briefing, described the salvage as a "work against nature, as it is being staged in an area known for its strong currents."
A group of families and religious organizations held a press conference in early July protesting the dissolution of the committee and the delays in raising the vessel. "Lifting of the ferry Sewol is a national task that victims’ families and Koreans have wished to complete," the group said.
it shouldn't be forgotten that the captain was eventually imprisoned for life on unprecedented charges of “murder through willful negligence.”
0
Tags: south korea ferry sewol salvage sink
Visit Home
Send to friends
Print
Newsletter
Share this news