News News
A
News ID: 67931 |
Likelihood of A Terrorist Attack in France:

Passengers of the Ferry to be Evacuated by A Bomb Scare 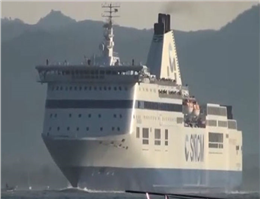 77 passengers and crew were evacuated from the ferry at the port of Joliette in Marseille, France, after hearing what sounded like an explosion onboard, MANA correspondent reported.
A senior police officer told local media: “The boat does not leak, so we do not understand what happened. It is not known if the explosion was held on the ship.” Latest reports, however, indicated that the cause might have been caused by World War Two ammunition on the seabed.
The incident comes a day after local media reported that armed troops are being stationed at Calais due to fears that ISIS jihadists could board U.K.-bound ferries and commit terrorist acts.
The heightened risk of a terrorist attack across the Channel comes after the Bastille Day lorry attack in Nice, which killed 84 people and the execution of a priest in a Normandy church.
French president Francois Hollande said he would increase armed security at transport hubs.
0
Tags: ferry france bomb
Visit Home
Send to friends
Print
Newsletter
Share this news