This week, containership fleet capacity has passed the 20 million TEU mark, another milestone in the rapid rise to prominence of the sector, according to Clarksons Research. 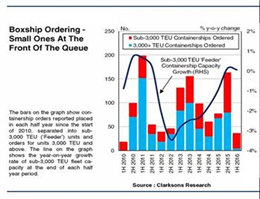 According to MANA cited by Clarksons, down the years, much of the capacity expansion has been driven by the delivery of larger and larger units at the big end of the fleet. However, the important role that smaller ‘feeder’ ships play in the container shipping network should never be overlooked.
Investment in containership newbuildings this year so far looks very different to the pattern seen in 2015. There was very limited investment in new boxships in 1H 2016, with just 75,000 TEU of capacity ordered compared to 2.2 million TEU in full year 2015.
1H 2016 saw 36 units contracted, and all were 3,300 TEU or below in size. This follows 104 orders for units below 3,000 TEU (‘Feeders’) in 2013, 85 in 2014 and 94 in 2015.
This represents a limited, but steady flow of orders for small containerships, but, as the graph shows, the main focus in recent times has been elsewhere (especially in capacity terms). Only with a hiatus in the ordering of larger ships does the feeder element look particularly pronounced.
However, to casual observers, investment in feeder capacity might seem obviously warranted. The global liner network requires the integration of ships of all sizes, and clearly the focus of investment in recent years has been the big ships.
Over 80% of capacity ordered since start 2010 has been for ships 8,000 TEU and above. But in reality it maybe hasn’t been hard to see why there has been a limited focus on investment in small and medium sized containerships.
Nevertheless, there appear to be clear drivers for future requirements. The orderbook below 3,000 TEU is limited, equivalent to 10% of fleet capacity compared to 33% above 8,000 TEU, and modern units are scarce.
Furthermore there are limits to network flexibility and the further cascading of larger ships into the feeder arena. The share of intra-regional deployment accounted for by ships 3,000 TEU and above has been fairly flat at just below 30% for some time. If extra intra-regional capacity is needed, that’s likely to mean demand for smaller units.
0
Tags: Container feedership newbuilding
Visit Home
Send to friends
Print
Newsletter
Share this news