CONTAINERSHIPS and tankers have dominated the use of Panama Canal’s third set of locks during the expanded waterway’s first month, according to the Panama Canal Authority. 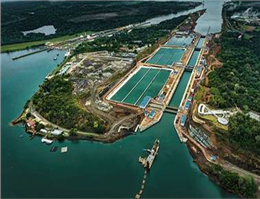 According to MANA,The official data confirmed the earlier industry expectation that the container and LPG shipping sectors would be most affected by the $5.2bn expansion project, aimed at enhancing vessel traffic between the Pacific and Atlantic basins.
As of July 27, 56 vessels had transited through the expanded canal — of those, 30 were containerships, the authority said.
The 9,443 teu neo-panamax boxship Cosco Shipping Panama was the first vessel to transit through the third locks on June 26. According to Lloyd’s List Intelligence, the ship was making an eastwards voyage and sailing towards Northeast Asia.
So far, the largest containerships that have passed the expanded waterway in terms of sizes were Cosco Guangzhou, measuring 350.7 m in length, and MOL Benefactor, MOL Beyond and MOL Belief, at 337.1m, according to the authority.
Also, 22 LPG tankers have passed through the new set of locks, the largest of which was 230.1 m long with a beam of 36.7 m.
Nippon Yusen Kaisha’s very large gas carrier Lycaste Peace was the first LPG carrier to make the transit, when carrying a cargo from Houston, Texas to Hitachi, Japan.
0
Visit Home
Send to friends
Print
Newsletter
Share this news