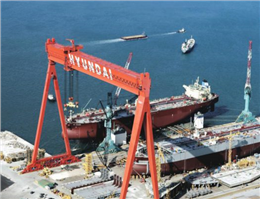 HHI’s shipbuilding sector received nearly 69% less orders in the first six months of 2016 compared to the same period in 2015. New orders in the first six months of the current year amounted to USD 992 million, as compared to around USD 3.2 billion reported in the first half of 2015, MANA correspondent reported.
The shipbuilder’s offshore sector also suffered in the period, with the orders being more than halved compared to 1H 2015, from USD 888 million to USD 417 million.
The bleak interim report comes as the company’s unionized workers teamed up with workers from seven other shipbuilding companies to organize a joint industrial action against self-restructuring measures that are to be carried out throughout the industry.
HHI plans to implement a USD 3 billion self-rescue plan which includes the sale of its subsidiaries, certain properties and receivables. The shipbuilder also plans to make further savings with employee salary cuts and work-sharing.
0
Tags: hyundai Shipbuilding south korea offshore
Visit Home
Send to friends
Print
Newsletter
Share this news