Loading and unloading operations at Elengy terminals in France have been suspended due to a workers’ strike. 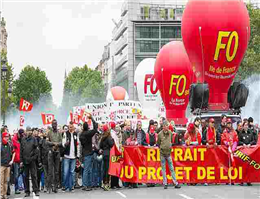 According to MANA, The strike was launched on Tuesday and is expected to last for 24 hours. However, the terminal operator company warned of a possibility that due to the impact of the strike there would be no send-out and no unloading operations on 25th and 26th of May, 2016.
According to CGT union, quoted by Reuters, the workers announced their plans to block two out of three Elengy terminals, thus suspending loading and unloading operations.
In addition, French oil worker unions have launched a strike action today at Port Jerome refinery and port terminal in Le Havre in northern France.
The workers of the Force Ouvriere union said yesterday that they would pursue industrial action at refineries owned by Total, Exxon and Ineos, in an attempt to exert further pressure on the government to abandon reforms to the Labor law.
The consequences are still being felt as rail and barge connections have been cut off, resulting in cargo congestion.
“The rail connection in and out of Le Havre has been damaged and we will be unable to offer carrier’s haulage via rail over the upcoming weeks until the connection is repaired. The barge alternatives are also saturated due to the strikes and this alternative is heavily reduced,” German company Hapag-Lloyd said in a customer advisory.
The company said it was looking for alternative options to ensure the quickest possible solution for carrier’s haulage moves, adding that at the time being it is only able to offer an all truck alternative.
0
Visit Home
Send to friends
Print
Newsletter
Share this news