Shipyards in Europe received in the first quarter of 2016 more orders than their competitors in Asia. 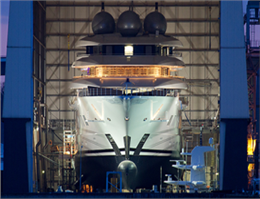 According to MANA, Namely, out of USD 6.5 billion worth orders on a global scale placed in the first quarter of this year, European shipyards won orders worth USD 3.7 billion, more than 50 percent, with the majority orders booked by the cruise ship construction sector in Europe.
Yards in Germany have experienced a major boost, with Meyer Werft winning an order from Saga Cruises and Disney Cruise Line for up to four ships in total. Italian shipbuilding major Fincantieri also kept itself busy working on deliveries of four new ships to Carnival and receiving orders for four new cruise ships, to be built for Costa Asia for deployment in China, and one for P&O Cruises Australia and Princess Cruises respectively. In addition, at the end of March Norwegian Cruise Line Holdings placed an order to construct a sister ship to Seven Seas Explorer for its Regent Seven Seas Cruises with Fincantieri.
The ordering streak continues into the second quarter as well. Earlier this month, Malaysian Genting Group ordered ten cruise ships from three German shipyards – Wismar, Warnemünde und Stralsund. The contracts’ value amounts to EUR 3.5 billion (USD 3.93 billion).
According to Reinhard Lüken, VSM’s CEO, this is the first time the turnaround in newbuilding orders has happened in a long time.
The situation in the shipbuilding market has drastically changed when compared to 2015. Specifically, South Korea, the world’s top shipbuilding nation won 30 percent of USD 80 billion worth newbuilding orders in the previous year. However, the slowdown in the global maritime industry has prompted owners to abstain from new orders as they work to cut costs. As a result, in the first quarter of 2016, Korea won only six percent of total orders.
The nation’s Big Three shipbuilders Hyundai Heavy Industries, Daewoo Shipbuilding and Marine Engineering and Samsung Heavy Industries have booked losses of up to USD 6.7 billion.
Due to the heavy losses, the three yards have launched massive restructuring programs which include layoffs and asset sale aimed at bolstering their liquidity as they struggle to secure more orders.
0
Visit Home
Send to friends
Print
Newsletter
Share this news