Currently, over 10 % of the maritime staff in Islamic Republic of Iran Shipping Line (IRISL) are non-Iranian; yet within the next 6 years, all the staff in this organization, both the staff on the deck and the ship engineers, will be Iranians. 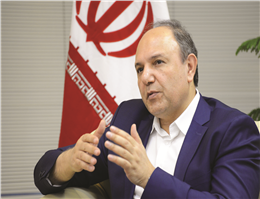 According to MANA correspondent, In the ceremony held for dispatching new IRISL students to Nowshahr Maritime University, the director and chairman of the board at IRISL announced in a press conference that the majority of the qualified personnel selected for maritime work are among the candidates for compulsory military service. Thanks to the coordination made with the Iran's Armed Forces Command Center, he added, students receive a scholarship at their arrival at IRISL University, and after graduation, they will start to work for the IRISL on the deck and as engineering staff. These students do not need to do their compulsory military service, and studying in IRISL University equals their service period.
Dr. Saeedi further stated that IRISL is in need of mechanical and electrical engineering graduates as well those of some other majors, and it intends to meet this need from the graduates of Iranian universities.
Moreover, he announced that these maritime programs will increase up to the point that all the IRISL staff are supplied from Iranian human resources. He also asserted that IRISL has even the capacity of exporting trained staff. At the moment, he added, we are negotiating with some big shipping lines as to training their staff. Dr. Saeedi stated that currently, only 10 % of the staff on IRISL fleet are non-Iranian, and this organization will reach a point that all its staff, both engineering and on the deck, will be all Iranian within the next 6 years.
The Economic Significance of Ship Building in Iran
Regarding the ships ordered to Iranian shipyards, IRISL director stressed that Iran's ship building capacity is extremely limited, and due to the sanctions and restrictions in the past years, this capacity could not have been developed. This capacity, he added, has to be developed by the participation of reputable international holdings. Without the participation of leaders in the world of technology, no improvements in ship building industry could be achieved.

Making a reference to the economic significance and the necessary time for shipbuilding  in the major companies like IRISL, He added: currently, building the largest ships in the world takes two years.hence, the pace of shipbuilding is a paramount issue.in this light, we need to promote our shipyard in a way that we could be able to compete with the world shipyards.
He referred to the fleet of IRISL and National Iranian Tanker Company (NITC) and remarked: if we could reach a point that we be able to build our ships inside the country , these two mentioned companies are certainly interested to order their ships in the domestic shipyards. To make a competition with our international rivals ,Saeedi continued, we should promote these two national fleets in the shortest possible time.
The director and chairman of the board at IRISL further stated: shipbuilding contracts had been signed between IRISL and foreign shipyards at the sanctions era but no result had come around due to the imposing sanctions.our high priority, he added, is the revival of these contracts.
Insurance and Ships Ranking Problems Solved
Pointing out to the post-JCPOA era in the shipping sector, the director and chairman of the board at IRILS remarked: since without ranking ,the ships are not allowed to commute, insurance and shipps ranking were considered as paramount problems, which now we are witnessing that they have been solved.
With regards to the launching of shipping lines to Europe .Dr. Mohammad Saeedi stated: due to the sanctions, our ships could not commute to European Ports for seven years. But now ,with the lifting of the sanctions, we do not suffer any confinement for international transportation and our ships are allowed to commute in North-South Europe, Ports of Hamburg , Antwerp ,Port of Genoa (Genova), Italy and Spain .
Announcing the resume of Persian Gulf Line to Latin America ,Brazil Ports, Argentina and Uruguay, Mohammad Saeedi stated: with the establishment of these lines, the export and import from Latin America countries will be conducted with the lower price.
Referring to the export of 40-Billion Dollar petrochemical products, he remarked: a part of these products , mainly, were exported to Europe through Turkey, but now ,these products are being exported directly from Iran to Europe which enjoy high value-added as well, it diminishes extra cost imposed by Turkey over Iranian ships.
In the end, Dr. Saeedi pointed out to the IRISL‘s financial exchanges and emphasized: in the post-JCPOA era, problems and obstacles related to the Banking Exchange sector at Islamic Republic of Iran Shipping Line (IRISL) has been removed
0
Visit Home
Send to friends
Print
Newsletter
Share this news