The mandatory use of mass flow meters (MFM) for marine gas oil (MGO) bunkering in the port of Singapore may happen in 2017, the same year that the use of the flow meter technology for heavy fuel oil bunkering becomes compulsory, it was reported. 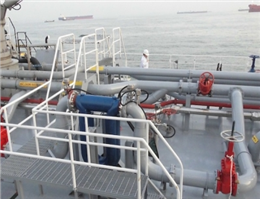 Captain M Segar, assistant chief executive (operations) at Maritime and Port Authority of Singapore (MPA), revealed that work has already started on implementing MFM for the much lower viscosity grade MGO, and results are thus far encouraging as seen from the test-bedding project.
“Moving forward, to create a level-playing field and to harmonise procedures, MPA will work towards implementing MFM for marine gas oil deliveries. This could come as early as 2017,” Segar said during his opening comments at the International Bunker Industry Association (IBIA) gala dinner held on Thursday as part of the annual Singapore Maritime Week 2016.
Singapore will enforce the use of MFM for bunker fuel oil from 1 January 2017, a move that is set to create a more efficient and transparent bunkering process, reducing bunkering time and eliminating quantity disputes.
Ahead of the 1 January 2017 implementation date, the port of Singapore has witnessed close to one million tonnes of bunker fuel deliveries conducted every month via bunker tankers equipped with a MPA-approved MFM, gradually increasing from 500,000 tonnes previously.
To-date, there are 73 bunker tankers approved for MFM delivery for marine fuel oil in Singapore.
“The bunkering industry plays an important role in entrenching Singapore's status as a global hub port. Working in close collaboration with our industry partners, MPA is committed to continue raising our bunkering standards to safeguard Singapore's position as a premier bunkering port of choice,” Segar said.
0
Visit Home
Send to friends
Print
Newsletter
Share this news