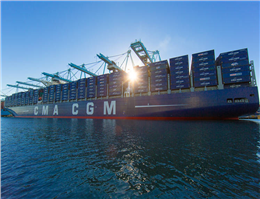 Acoording to MANA,CMA CGM will test out a third terminal in southern California later this week when one of its 18,000 teu-class ships berths on Friday.
APL’s Global Gateway South facility is due to handle CMA CGM Benjamin Franklin, the first time the Los Angeles terminal has received a vessel of that capacity.
On its first visit over Christmas, the ship called at APM Terminals' Pier 400 in Los Angeles. On its return, it went to Pier J in Long Beach, in which CMA CGM has a 10% stake.
However, the French line will soon have full control of the APL terminal once it has completed the takeover of Neptune Orient Line.
CMA CGM has led the way with this size ship on the Pacific, and plans to operate a full string of 18,000 teu vessels in the Asia-US trades from late May.
Although Global Gateway South has not handled such a big ship before, APL’s head of operations for the America Region Greg Tuthill told Lloyd's List last month that “it could service much larger ships than we do today without any problems
0
Visit Home
Send to friends
Print
Newsletter
Share this news