Europe is expected to receive its largest-ever diesel cargo after French refiner Total booked a super tanker to sail to the region even as it faces brimming storage tanks and wilting demand. 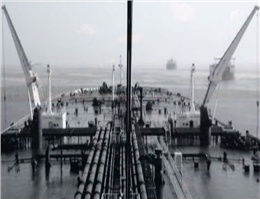 According to MANA,Total has chartered the newly-built very large crude carrier (VLCC) tanker Alice to ship 270,000 tons of diesel, three times the typical cargo size on the route, from Asia to the port of Antwerp in Belgium, according to shipping data and Reuters ship tracking.
A cargo of this size is bound to put more pressure on Europe's diesel prices in a market already facing an influx of imports in the coming weeks from all corners of the world.
Euronav-owned, the 299,320dwt 333 meter (1,100 foot) Alice left the port of Gunsan in South Korea on its maiden voyage on January 13 and loaded its cargo at the Vopak Dialog Pengerang Terminal in Malaysia before being directed to Europe in early February, according to Reuters data.
A typical VLCC voyage from Malaysia to northwest Europe lasts around 32 days. Alice is one of dozens of VLCC set to be built this year for crude oil trading, but often maiden voyages are used to transport clean products, according to traders.
The delivery of the cargo comes at a time where Europe's diesel storage is near maximum capacity. Rising global production of diesel and slowing demand have led to a sharp increases in global storage levels over the past two years with few signs of the glut easing soon.
New, ultra-modern refineries that have started production in recent years in Asia and the Middle East have radically changed the global diesel trading markets.
At the same time, ever-bigger ships are being used to transport the product around the world, but the VLCC Alice would be the first tanker of its size to reach European shores with a cargo of refined product, according to several traders.
Europe's diesel prices are considered the global benchmark for the road fuel due to its large fleet of diesel cars.
REVERSE ARBITRAGE
While Total imports diesel into Europe, other tankers carrying the fuel are being diverted to the U.S. East Coast in a rare arbitrage that highlights the growing problem of finding an outlet for diesel in an increasingly oversupplied market.
The 90,000 ton Minerva Pisces was redirected in recent days to the New York Harbor from Gibraltar, some two weeks after loading diesel at Reliance Industries' 580,000 barrels per day Jamnagar refinery in the west coast of India, according to Reuters shipping data.
The tanker reached Europe via the Cape of Good Hope, a detour from the faster route via the Suez Canal that has become a normal move as traders seek to keep cargoes on water for as long as possible due to record-high global stocks and tepid demand.
At the same, the world's top oil trader Vitol chartered the 60,000 ton Kamome Victoria from the Baltic port of Ventspils to Florida with a cargo of diesel, according to traders.
Several other diesel cargoes have been diverted in recent months even though the arbitrage from Europe to other market remains rare.
0
Visit Home
Send to friends
Print
Newsletter
Share this news