Chairman of the board and managing director of Islamic Republic of Iran Shipping Lines (IRISL) together with managing director of Container Company and Iran O Hind Shipping Company (IHSC) have had a brief meeting with India’s prime minister, Road and Shipping Secretary, manager of Export-Import Bank and port authorities and Indian shipping on the margin of the World Maritime Conference in India. 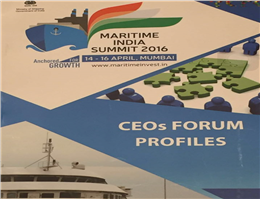 Dr. Mohammad Saeedi who has traveled to India to participate in the First World Maritime Conference in India co-hosted by India and South Korea, has met India’s prime minister to promote mutual ties and resume the activity of Iran O Hind Shipping Company, MANA correspondent reported.
In a professional meeting of India’s prime minister along with the head managers of port and shipping lines from different countries, managing director of IRISL highlighted the crucial function of IRISL in the future of North-South Corridor in CIS region and emphasized the company’s readiness in providing road and rail maritime services.
Interviewing with two television channels regarding the perspective of IRISL in the region, visiting the exhibition on the margin of the meeting to become familiar with the capability of producers in the realm of maritime industry and service companies of India, meeting the managing director of India Port Association, negotiating with the owner and operators of Indian port and meeting managing director of Korean Ship classification society were all The plans of Dr. Saeedi’s formal travel to India.
Dr. Saeedi negotiated with different agents of commercial shipping companies which have the ability to be in harmony with the significant goals of IRISL after JCPOA (Barjam).
Meeting the prime minister of North Korea in maritime affairs had resulted in expressing the problems between companies, Korean bank and IRISL and they reached an agreement. Korean company will take the necessary measures to enhance the mutual ties between IRISL and these companies, according to the agreement.
It is worth noting that World Maritime Conference, co-hosted by India and South Korea, held by the presence of 450 involved shipping industries such as ship-owners all over the world, shipbuilders, marine insurance companies, Asian and European banks and by the participation of India’s prime minister, road and shipping secretaries, governors of coastal states of India on Wednesday, Thursday and Friday of the current week in the port city of Mumbai.
Dr. gholamreza Ansari- Iran’s ambassador in India- as well as Masud Khaleghi- the Consul General of Iran in India- have participated in this Conference.
0
Visit Home
Send to friends
Print
Newsletter
Share this news