The port of Antwerp handled 53,265,552 tonnes of freight in the first three months of this year, 3.9% more than in the same period last year. The container volume in TEU did particularly well with growth of 4.6%, while liquid bulk rose to new heights with growth of 10.6%. Overall, last month was the best month ever recorded in the port of Antwerp in terms of freight volume handled. 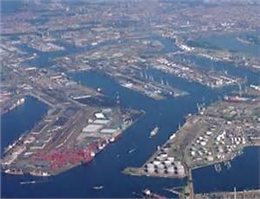 According to MANA ,The Port Authority is naturally very pleased with these excellent growth figures but nevertheless guards against unbridled optimism in view of the continuing volatility and turbulence in the market.
Containers and breakbulk
The container tonnage rose by 3.2% during the first quarter, finishing at 29,143,365 tonnes. This corresponds to a volume of 2,459,847 TEU, up 4.6% on the same period last year.
The ro/ro volume for its part remained almost static, up just 0.4% to 1,111,278 tonnes. On the other hand the number of cars handled rose by 5.7%, to 308,484 units. Conventional breakbulk also registered growth in comparison with last year, thanks among others to the volume of steel handled (up 14.5% to 1,806,160 tonnes). At the end of March the total volume of conventional breakbulk stood at 2,373,819 tonnes, an increase of 2.4%.
Liquid bulk
The volume of liquid bulk handled rose by an impressive 10.6% during the first three months of this year, to 17,693,219 tonnes. As for oil derivatives, these amounted to 13,178,993 tonnes for the first quarter, representing growth of no less than 17.0%.
Dry bulk
The amount of dry bulk handled in the port for its part came to 2,943,871 tonnes, a drop of 17.9% compared with the first quarter of 2015. In the meantime the falling demand for coal resulted in a negative first-quarter result in this sector, falling very sharply by 81.1% to 69,975 tonnes. The planned conversion of the coal-fired power station in Langerlo (Belgium) weighed heavily on the result, but ports in general where coal is stored are faced with falling imports and declining stocks. The volume of ore handled also fell significantly, down 33.9% to 465,796 tonnes, helping to push down the overall result for dry bulk.
Seagoing ships
A total of 3,535 seagoing ships called at the port of Antwerp during the past three months, an increase of 3.7%. The gross tonnage for its part rose by 15.2% to 96,557,856 GT.
0
Visit Home
Send to friends
Print
Newsletter
Share this news