Chinese shipyards have seen an increase in newbuilding orders in the first quarter of 2016, according to data released by China’s Ministry of Industry and Information Technology. 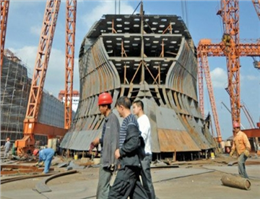 From January to March of 2016, the country’s newbuilding orders jumped by 23,9 percent to 7.42 million dwt, compared to the same period a year earlier, while the shipyards constructed 8.35 million dwt in vessel tonnage during the first quarter, down by 11.8 percent.
Due to a global oversupply of vessels, the Chinese shipbuilding industry struggled to stay afloat as it encountered a major decline in newbuilding orders.
During the first quarter of the year a total of 77 new ships were ordered, against the 375 ships ordered in the corresponding period in 2015, data released by Clarksons shows.
In January only 15 newbuilding orders were placed, compared to 179 in the corresponding month in 2015.
In February the number slightly increased to 17 orders, while the newbuilding contracts continued to rise in March as well, as shipowners ordered 45 new vessels, Clarksons figures indicate.
The ordering slump seems to be subsiding as 23 orders have already been booked for April, bringing the overall orderbook for this year to 100 new ships.
0
Visit Home
Send to friends
Print
Newsletter
Share this news