Ports giant to send research team to Georgia to evaluate potential for terminals and logistics park. 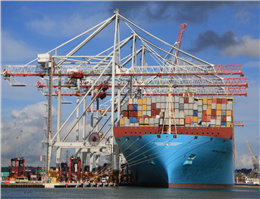 According to MANA,DP WORLD, one of the world's largest terminal operators, will be exploring opportunities for economic co-operation with the former Soviert republic of Georgia, including the possibility of building a marine terminal and logistics park.
A DP World research team will visit Georgia to evaluate the potential for the possible construction of a marine terminal, inland terminal, logistics park or economic zone similar to many other projects being developed along the New Silk Road between China and Europe, Dubai-based DP World said.
DP World chairman and chief executive Sultan Ahmed Bin Sulayem met Georgian Prime Minister Giorgi Kvirikashvili at the Annual Investment Meeting in Dubai to discuss future opportunities for co-operation.
"Georgia presents a promising business environment where trade can play an ever greater role in developing the country’s manufacturing base, while encouraging growth of the state’s extensive logistics, distribution and warehousing potential," Mr Bin Sulayem said in a statement.
Mr Bin Sulayem, who is also chairman of Ports, Customs and Freezones Corp, added that Georgia was well placed to facilitate trade between Aktau port in Kazakhstan along the New Silk Road, providing access to the Black Sea.
Mr Bin Sulayem suggested cost-effective solutions for Georgia's trade and logistics development plans that would incorporate the latest industry trends, the statement said.
DP World also provides the Kazakhstan government with advisory services for the development of the Khorgos Special Economic Zone and Inland Container Depot, with a similar arrangement under a separate contract for the Port of Aktau, Kazakhstan's main cargo and bulk terminal on the Caspian Sea.
The company has a range of terminals along the New Silk Way linking China to Europe. DP World has three joint venture operations on mainland China at Tianjin, Yantai and Qingdao and another in Hong Kong.
In India, DP World plans to explore infrastructure opportunities worth more than $1bn in the next few years. It has invested $1.2bn in capital and is currently the only foreign operator with six port concessions in the country, with about 30% market share. It is in 14 locations in Europe.
0
Visit Home
Send to friends
Print
Newsletter
Share this news