The Kazakhstani President sat with the economic figures of Iran's administration this morning at Espinas Hotel, Tehran. 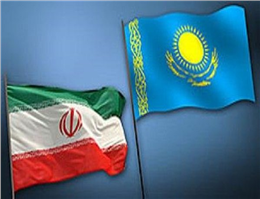 At the opening of this meeting, Mahmoud Hojjati, Iranian Agriculture Secretary, welcomed the Kazakhstani President and his accompanying delegation to Iran, MANA correspondent reported. Making a reference to the history of the ties between the two nations, Hojjati announced that Iran and Kazakhstan are going to sign 60 memoranda of understanding in the light of this official visit.
Emphasizing that Kazakhstan's economic system has shifted from socialist to free market economy following the decommission of the USSR, Nazarbayev asserted that Kazakhstan has made a tremendous change in its investment methods. Further to the signing of 60 MOUs with Iran, Nazarbayev deemed his meeting with Iran's grand leader and president desirable and constructive.
Following the speech of Kazakhstani President, the investment secretary of this country requested some of the Iranian investment holdings to express their perspectives regarding the promotion of the mutual ties between the two countries.
Halfway through this meeting, Mohammadreza Ayatollahi, the C.E.O. of Shasta holding (the largest investment holding in Iran) expressed his visions and his company's views. Next, Dr. Mohammad Saeedi, as a member of the board at Shasta and the director of the Islamic Republic of Iran Shipping Line (IRISL, a sub-Shasta holding), elaborated on the investment capabilities of Shasta in various fields and stated that this holding is capable of investing up to 15 billion dollars. Dr. Saeedi also added that Shasta is one of the largest holdings in Iran and owns 9 mega-holdings in fields such as mines, medicine, cement, transportation, oil, gas and petro-chemistry, energy, tankers, and banks.
Counting IRISL as one of the Shasta-Group Holding, Dr. Saeedi stated that an MOU of collaboration was signed between IRISL and Kazakhstan's Railway Administration regarding the establishment of a joint-venture in Anzali Port, and to connect Aktau, Inche Boroon, and Bandarabbas. This practice, according to Dr. Saeedi, will connect Kazakhstan to international waters. Besides, a contract was signed regarding the integrated transportation.
With reference to the capabilities of the IRISL with over 160 ships and owning various companies all throughout the world, from South East Asia to Northern Europe, Dr. Saeedi stressed that IRISL has a lot to offer to Kazakhstan. He hoped that IRISL could commence its activities soon after the MOUs are signed.
In response to Kazakhstani President's question as to the capabilities of IRISL, Dr. Saeedi explained that the largest fleet of ships in the Caspian Sea belongs to IRISL. He added that Khazar Sea Shipping Line is a sub-member of the IRISL and it owns over 24 ships, which make it the largest Caspian fleet. The majority of the Kazakhstan's grains are imported to this country through this line.
The director and the head of the board at IRISL, further expressed that Iran Shipbuilding and Offshore Industries Complex Co. (ISOICO), which belongs to the Expansion one of the largest repairs yards in Iran, this yard offers services to IRISL and other private sector vessels. and Restoration Organization, enjoys excellent facilities in the South of Iran. Next to this plant, there is a repairs yard which belongs to Persia Hormoz Co. and it is at the full disposal of IRISL. As one of the largest repairs yards in Iran, this yard offers services to IRISL and other private sector vessels. Later on in this meeting, various other companies in the fields of agriculture and infrastructural industries elaborated on their capabilities and abilities. In this meeting, MANA correspondent reported, President Nazarbayev was accompanied by several Kazakhstani secretaries such as the transportation secretary and investment secretary, Kazakhstani ambassador in Iran, and several Kazakhstani private sector managerial personalities. Iranian delegation, on the other hand, included Mahmoud Hojjati, the secretary of Agriculture, Deputy Industry Mine and Trade secretary, Director General of Iranian Customs Organization, IRISL director, Shasta C.E.O., and several other high-ranking administrative and private sector figures.
0
Visit Home
Send to friends
Print
Newsletter
Share this news