Exports to be Increased from Bushehr Port

Bushehr Province Ports and Maritime Organization director stated: Bushehr Port witnessed a 15-percent rise in the exports of goods in the course of the past year in comparison with the previous years. 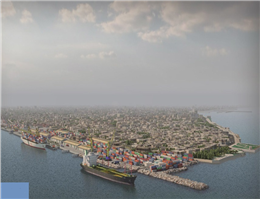 Emphasizing that Bushehr Port enjoys high capabilities in the embarking and disembarking of commodities, Mohammad Mehdi Benchari stated: Bushehr Port with the capacity of 8,000,000 tons possesses 15 Dock Posts with the length of 2200 meters and the areas of 57 hectares, MANA reported.
Announcing the execution of port projects in Negin Island ,he further stated: with the completion of infrastructures in Negin Port Complex, the capacity of Bushehr Port would be doubled.
Bushehr Province Ports and Maritime Organization director remarked: Containers and Multi-purposed wharfs is 900 meters, two Oil Wharfs ,he added, is supposed to be constructed.
With reference to a 15-percent rise in the exports from Bushehr Port, Benchari stated: the exports have been increased in Busher Port, in a way that, this port experienced a 15-percent ascent in comparison with previous years.
In the end, Bushehr Province Ports and Maritime Organization director remarked: construction materials and mineral materials constitute over 60 percent of export goods ,and petrochemical materials and non-petrochemical materials encompass 18 and 19 percent of export goods ,respectively. the majority of export goods target Persian Gulf countries and India, he further added.
0
Visit Home
Send to friends
Print
Newsletter
Share this news