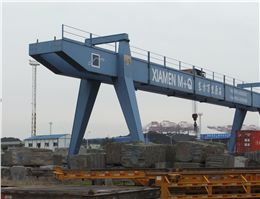 According to MANA,The company said the move will help improve operational efficiency at its container terminal business mainly located at the Haicang port area in Xiamen, China.
As part of the asset transfer agreement, XCTG will acquire the two cranes for a total consideration of about Yuan10.2m ($1.6m) and will pay for the assets through its internal resources.
Xiamen Port Holding originally paid around Yuan17.0m for the assets.
The final accepted bid price was determined via a public tender, which XCTG had participated in, with reference taken from valuations made by a registered and qualified independent asset appraiser in Xiamen.
XCTG paid a Yuan3m security deposit after the public tender with the balance to be transferred to Xiamen Port Holding within 30 working days after the signing of the asset transfer agreement.
Xiamen International Port is a port terminal operator in Xiamen, China which is involved with container loading and unloading for international and domestic trade; bulk or general cargo loading and unloading and storage for international and domestic trade; and ancillary port services such as shipping agency, tallying, tug berthing and unberthing as well as port-related logistics in Xiamen
0
Visit Home
Send to friends
Print
Newsletter
Share this news