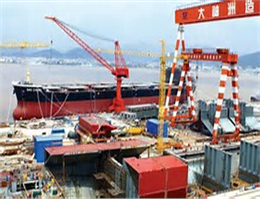 According to MANA,CHINESE newbuilding prices have fallen so low that shipyards, fretting about loss-making orders, have become increasingly reluctant to offer further discounts as the market showed little signs of a recovery.
This is leading the country’s shipbuilders into an even more gloomy 'winter' for the industry.
The monthly China Newbuilding Price Index, which tracks ship prices at domestic yards based on the views of 18 major shipbrokers across the world, slipped another 0.7% from the month-ago level to 823 points in March.
The decline is moderate, compared with the 1.0% decrease in February and the 1.8% fall in January. But rather than an indication of rising market activity, the slowdown only reflected the fact that few Chinese yards were willing to offer more price cuts in return for new contracts — at least in the dry bulker sector, according to CNPI managing director Liu Xunliang,
“At the current price level, yards will make losses if they take new orders,” Mr Liu said, adding only players that have few orders on hand and are desperate to boost cashflows might be forced to do so.
The price index for handysize and capsize dry bulkers, which indicates the fair market value of such types of newbuildings in China, stood at $20m and $45.3m respectively in March, representing an 11% and 12% drop from the year-ago level.
While newbuilding deals plummeted more than 75% year on year in the first two months of 2016, according to China Association of the National Shipbuilding Industry, last month saw little improvement, except for the deals for 20 valemaxes sealed between Beijing’s state-owned carriers and its state-owned yards.
One manager at a privately owned Chinese yard in Jiangsu province told Lloyd’s List they are now just able to break even with the orders achieved in the past two years, after deducting all the costs including bank interest and equipment deprecation. “But only if the contracts can be fulfilled,” he added. “If there are delays or penalties we’ll lose money.”
The yard, specialising in handysize and supermax bulkers, box feeders and small chemical tankers, has yet to make any headway in contracting this year. With a designed annual capacity to deliver 20 vessels, it now will only deliver eight, according to the manager.
“But we won’t accept loss-making orders, not if we also have to bear the financing risk for the shipowners,” he said.
As owners get more selective amid distressed market conditions, yards are being forced to fill the borrowing deficit for their clients. Take a $30m bulker, for example: the Jiangsu shipbuilder needs to find financing of about $23m for its client.
On the other hand, yards may well have realised that the price reductions, though painful, have drawn little attraction from buyers who have homed in on a lucrative secondhand market.
“Further softening dry bulk newbuilding prices are so far failing to attract any ordering interest and logically so,” shipbroker Intermodal wrote in a recent note.
“Any investment potential out there is currently being entirely absorbed by the secondhand market, where modern tonnage across all sizes is priced at 45% or lower of respective newbuilding units.”
0
Visit Home
Send to friends
Print
Newsletter
Share this news