Signing MOU on Cooperation between Iran and Kazakhstan

Cooperation protocol was signed between Islamic Republic of Iran Shipping Lines (IRISL) and Kazakhstan Railroad JSC National Company in the presence of presidents of the two countries. 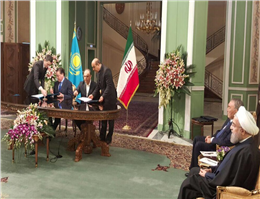 In the presence of President Hassan Rouhani and President Nursultan Nazarbayev of Kazakhstan, nine memoranda of understanding and cooperation agreements were signed in Saadabad Palace , MANA correspondent reported.
According to this report ,President Nazarbayev arrived in Tehran on Monday morning at the head of a high-ranking delegation on a 2-day visit ,and was warmly welcomed by President Hassan Rouhani in Saadabad Palace.
Following bilateral negotiations, Cooperation protocol between Islamic Republic of Iran Shipping Lines (IRISL) and Kazakhstan Railroad JSC National Company was signed.
in March 2015,in a joint meeting which was held between Dr. Mohammad Saeedi ,the director and the Head of the Board at Islamic Republic of Iran Shipping Lines (IRISL) and the Head of Khazakestan National Transportation Company, both side reached an agreement for establishing a Joint Venture Company in Anzali Port, based on this agreement, port of Aktau, Banddar Abbas and Incheon Terminal would be under the supervision of this Joint Venture Company.
0
Visit Home
Send to friends
Print
Newsletter
Share this news