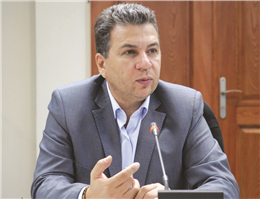 The director of Shipping Training Center (STC) stated that his center's active presence in the north of Iran simultaneous with Tehran and Bushehr has noticeably promoted the quality of its educational services to sailors in a comprehensive level.
In an interview with MANA reporter, Mahmoudreza Haghdusti announced that STC held 420,000 hours of classes for students last year, and added that STC moved into a new building in Shiyan last year, where learners could enjoy over 16,000 square meters of space and all types of state-of-the-art educational and administrative facilities. This new building has 17 classrooms, workshops, well-equipped laboratories and navigation simulators, engine, GMDSS and oil and chemical tankers, and thanks to these facilities, STC managed to hold 420,000 hours of training for 6,000 sailors last year.
Haghdusti further stated that 12 dormitory structures were constructed to accommodate non-Tehrani sailors in Tehran.
In regards with the establishment and improvement of a training branch in Anzali Port, he added that STC, in collaboration with Khazar Sea Shipping, has managed to obtain the license to hold maritime training programs from Ports and Maritime Organization. Hence, a training branch in Anzali Port was established and equipped, and it is ready to cater to the local sailors of Gilan Province this year.
STC director also asserted that his organization's active presence in the north of the country as well as in Tehran and Bushehr has resulted in the promotion of its educational quality in a broad range and it is now capable of offering better services to sailors.
The active presence of STC in the STCW Summit, which is annually held in the International Sailing Organization in England, promoted the status of Iran's shipping and as well, it made a striking contribution to updating and organizing STC's data regarding sailing rules and environmental issues.
Moreover, STC director speculated that the training hours held by his institute in the fields of maritime, logistic and port operations will reach 500,000 hours this year. At the same time, STC intends to improve the English language skills of its maritime and terrain staff based on the pre-determined standards.
Finally, Haghdusti added that research activities of STC will increase this year with the collaboration of Bach-up and Human Resources Department, and they will mostly revolve around a human resources macro-plan and designing an assessment center. Moreover, STC simulators have been updated and the necessary correspondence has been made with the world-renowned simulator suppliers.
0
Visit Home
Send to friends
Print
Newsletter
Share this news