Khuzestan Province's Ports and Maritime Organization deputy announced that the first gray cement maritime cargo is being embarked to be sent off to Port of Basrah. 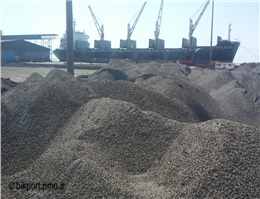 Asserting that maritime transportation's capabilities should be fully utilized to bring about economic and trade use, Gerailou stated that gray clinker, which used to be transported solely by land, was embarked on a cargo ship for the first time in Imam Port to be shipped to Port of Basrah. This cargo weights 33,763 tons.
Furthermore, he had it that the cargo is the first in a series of export cargos are going to be embarked in Imam Grand Port Complex, and which have been speculated reach the tonnage of 500,000 tons.
Khuzestan Province's Ports and Maritime Organization deputy proposed that Imam Grand Port Complex offers various merits to its activists, namely adding a new maritime destination for clinker (and other construction material), promoting the share of trade products, increasing job opportunities in various parts and variety in the services offered to Iranian exporters. He further stated that maritime transportation reduces traffic in the former land route and as well diminishes road transportations' human and vehicle perils.
The fact that Imam Khomeini Port's Free Economic Zone is neighboring Iraq, and also the fact that this Grand Port Complex enjoys equipment and facilities for massive embarkation and disembarkation of goods doubles the significance of utilizing its full capacities.
0
Visit Home
Send to friends
Print
Newsletter
Share this news