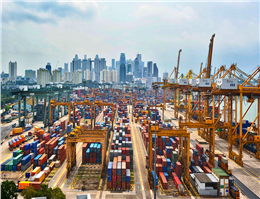 SINGAPORE, the world’s second-busiest container port, handled fewer containers in February, initial data from the Maritime and Port Authority of Singapore showed.
Throughput totalled 2.41 m teu in February, down 7.7% from 2.61m in the same month a year earlier, according to the MPA preliminary estimates.
Month-on-month, the Singapore port handled 3.2% fewer boxes from January’s almost 2.49m teu, MPA figures showed.
For the first two months of 2016, it moved 9.1% fewer containers at 4.89m teu from 5.39m teu in the same two-month period last year.
The lower container volumes came in the face of a 10% concession on port dues for container vessels calling at the port of Singapore, if the ships are carrying out cargo works with a port stay of not more than five days, which the MPA granted from January 15 this year.
The concession, which will be in place for a year, is on top of the existing port dues concession such as the Green Port Programme incentives and the 20% concession first introduced in 1996.
The rival port of Shanghai also moved fewer boxes in the first two months of 2016, totalling 5.53m teu from 5.73m teu in the same period a year earlier.
The port handled 2.59m teu in February alone, marginally higher from 2.57m teu in the same period a year earlier, according to data from operator Shanghai International Port (Group) released last week.
The Chinese New Year holidays fell in February this year. China’s exports plummeted 25.4% during the month from a year earlier while imports dropped 13.8% year-on-year.
The combined January-February exports, which should address some of the holiday effect, declined 17.8% from a year earlier and imports slid 16.7% year-on-year.
In 2015, the Shanghai port’s container throughput rose 3.5% to 36.5m teu, putting it ahead of rival Singapore, which handled 30.9m teu, a contraction of 8.7% from a year earlier.
0
Tags: singapore
Visit Home
Send to friends
Print
Newsletter
Share this news