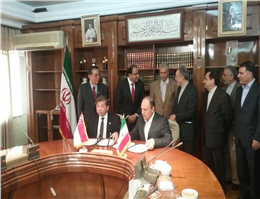 Singapore's secretary of industry, mine and trade, MANA reported, paid a visit to Iran accompanied by a high-profile delegation, and sat with Iran's secretary of Cooperatives Labor and Social Welfare.
In this meeting, Dr. Ali Rabei elaborated the qualifications of Iran's Cooperatives Labor and Social Welfare Department, and explained the activities of this department's sub-companies in various areas – namely transportation, mines, tourism, hotel management, transportation holdings, such as IRISL and National Iranian Tanker Company (NITC). He further expressed his department's interest in mutual interactions with PIL, and collaborations in terms of technology transfer, communications between the vocational training centers of the two countries, and aid to the promotion of privatization and insurance coverage procedures.
In this meeting, Singapore's secretary of industry, mine and trade welcomed the idea of the two countries collaborating, and stated that Iran enjoys a strong potential in the fields of transportations, particularly maritime transportation, shipping, and tourism industry, and we are as well interested in expanding our collaborations with Iran in the mentioned fields.
As part of the meeting between Singapore's secretary of industry, mine and trade and Iran's secretary of Cooperatives Labor and Social Welfare, a memorandum of understanding was signed between IRISL and PIL. In this MOU, different matters have been emphasized, namely the establishment of feeder lines in South East Asia, Southern Asia, the Middle East, the Black Sea and other regions, offering shipping services to container vessels and bulk carriers, and collaborations in terms of ship construction.
0
Visit Home
Send to friends
Print
Newsletter
Share this news