Iran and Kazakhstan set up a Joint Venture Company 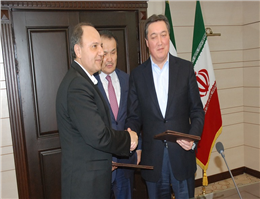 According to MANA, following the agreement between SSIC and IRISL accordingly and Kazakh State Transport Company, the head of the Kazakh Company along with the Kazakh ambassador to Iran visited Mohammad Saiedi as the managing Director of IRISL and voiced their interest to cooperate with Iran which benefits a unique geographical reality.
The Kazakh team laid emphasis on the trade development in CIS countries through North-South corridor and remarked IRISL as a reliable partner to accomplish this.
Apart from following up the application of former agreements, the parties agreed to establish a joint venture company through which investment and development of Inche Boroun Port along with Bandar Abbas Port and Port of Aktau development are facilitated and the company’s framework is to be declared by mid-March.
Mr. Mamin as the managing director of Kazakh State Transport Company stressed Kazakhstan’s plans to develop the trade and transit with China and the neighboring countries and expressed its interest to share its facilities with Islamic Republic of Iran Shipping Line (IRISL).
It is worth noting that the Kazakh State Transport Company operates in different realms including railroad, air transportation as well as land and maritime transportation and experts expect a boost in the import of Iranian goods into CIS countries and export of CIS products to Iran and other parts of the world through Bandar Abbas Port and finally the fee seas.
0
Visit Home
Send to friends
Print
Newsletter
Share this news