Australia To Invest In Chabahar Port

The Deputy ambassador to Australia paid a visit to Shaid Beheshti Port in Chabahar and stated: investment in Chabahar Port is among our major economic purposes. 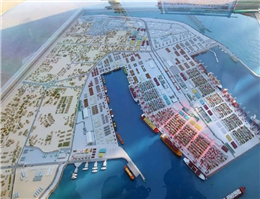 According to MANA , Mr. Petrson as The deputy ambassador to Australia, and Villiam loder as the second secretary of embassy along with the delegate accompanying them paid a visit to the development plan of Shaid Beheshti Port in Chabahar.
In this visit, seyed Hassan Ebrahimi as the head of Chabahar maritime affairs elaborated on the measures which have been taken in the  first phase and stated: the India private sector ,in the first phase, has entered operational circuit for purchasing equipment
Ebrahimi added: since that the development of Chabahar Port is among the major government ‘s policies, therefore, providing the necessary infrastructures in Makran Coast has paved the way for the presence of domestic and foreign private sectors. he further stated: it is fortunate, Shaid Beheshti Port in Chabahar was warmly welcomed by various investors following the nuclear agreement between Iran and 5+1.
seyed Hassan Ebrahimi, in this meeting, given that Australia enjoys the capacities and capabilities in the field of steel, shipping, domesticated animals and meat, we are interest in making investment in Chabahar Port by Australian.
This official authority remarked: currently, we are fully prepared to attract investment in the fields of bunkering as well as scrape.
Expressing his satisfaction regarding the measures taken in Chabahar port, petreson as The deputy ambassador to Australia stated: given the agreement in the nuclear issue ,the ground has been prepared for competition in Chabahar Port, in this regard, effective measures would be announced to Australian investors.
In the end, he added: it is hoped that the relationships between the two countries to be promoted.
0
Visit Home
Send to friends
Print
Newsletter
Share this news