A delegation comprising the governor, the ambassador, and the port authorities of Italy sat with the chairman of the board and director of Islamic Republic of Iran Shipping Lines (IRISL), and demanded expanding mutual collaborations between the two countries in the post-sanctions era. 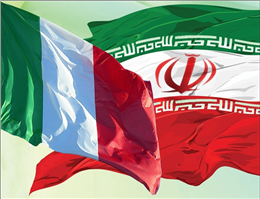 Expressing his interest in cooperation with IRISL, Zeno D'Agostino, the head of Italy's ports and shipping organization stated that the volume of Iran-Italy trades will increase, and Trieste port will plays a paramount role in Iran-Italy trades, MANA correspondent reported.
He announced that Trieste Port transported 75 million tons of cargo and 0.5 million TEU containers in 2015. With its exclusive container port, he further remarked, Trieste Port offers the investors two opportunities for terminal operations and for bunkering .This port possesses the top rank among the petroleum ports worldwide.
The chairman of the board and director of Islamic Republic of Iran Shipping Lines counted the capabilities and the capacities at the IRISL, and the conditions and the qualities of IRISL's activities in the course of the sanctions era. He also deemed the post-sanctions conditions as a golden opportunity for shipping lines to expand their ties and extend their activities.
With the lifting of the sanctions, Dr. Mohammad Saeedi continued, the IRISL fleet is fully prepared to transport import and export goods to and from European ports directly.
Moreover, he referred to the fact that IRISL possess the largest bulk fleet, and stressed that currently, IRI exports various petroleum products to Europe, through re-exporting from Turkey. He speculated that the Iran-Europe cooperation in the post-sanctions era will reach an approximate turnover of 10 billion Euros.
In the course of this meeting, both parties emphasized the capabilities of joint activities in the fields of container transportation and fuel with the lifting of the sanctions.
0
Visit Home
Send to friends
Print
Newsletter
Share this news