MSC Swiss to Dock to ShahidRajaei Port after 6 Years

The Director of Hormozgan Province’s Ports and Shipping Organization announced that TheMSC DOMITILLE ship, which belongs to the second best container line in the world, docked to ShahidRajaei Port after over 6 years. 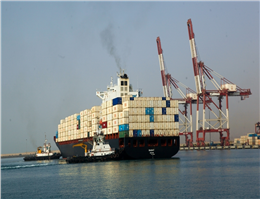 According to MANA reporter from Hormozgan ,Ebrahim Idani participated in the docking ceremony of MSC DOMITILLE, and stated that today noon (Thursday, Dec 31 2015), the first ship belonging to Swiss MSC Line with the capacity of 9,400 TEU containers docked to Terminal 2 of Shahid Rajaei Port. Pointing out that it had been over 6 years since a Swiss ship had docked in Shahid Rajaei Port,he added that MSC DOMITILLE has carried 1,162 export and import TEU containers from Shanghai Port, China to Shahid Rajaei Port.
Idani announced that as of today, ships belonging to MSC Line are going to dock to Shahid Rajaei Port once a week.
This official added that Swiss MSC line is the second largest container line in the world, and it is the 17th international liner whose ships will frequently dock at Iran’s largest port. The Director of Hormozgan Province’s Ports and Shipping Organization added that the most significant merits of the docking of these liners to ShahidRajaei Port is the decrease in the transportation fare from Far East. Mutually, the liners have the benefit of accessing Iranian market.
He state that as of now, the transportation fares will decrease for both export and import goods, and larger capacities will come around for Iran in the future.
0
Visit Home
Send to friends
Print
Newsletter
Share this news