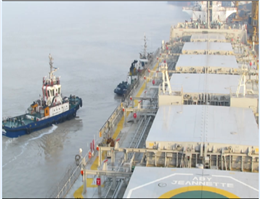 According toMANA, Eng. Abdullahi, the general manager of Port and Maritime Organization (PMO) of Khuzestan province who is also the general manager of Imam Khomeini Special Economic Zone Port, said the PMO and Railways of Islamic Republic of Iran (RAI)are striving to increase the share of rail Transport in Port trades.
"Following this common approach, 25767 goods wagons have arrived at Imam Khomeini Port, and accordingly we can say that one million and five hundred tons of goods were transported around the country.", he said.
He added: "We had a 71 percent growth in rail transport compared to last year."
On the preparedness of facilities and operational amenities, he stated: "To increase the share of rail transportation in Imam Khomeini Special Economic Zone Port, a part of the freight traffics has been steered into rail road transportations, and consequently, the circumstances have been facilitated to maximize the use of railroad transportation."
He also emphasized on the advantages of railroad transportation, such as reducing the traffic on the roads andthe volume of air pollutions, and increasing the safety of the Transport. He said: "Ever since energy subsidies have changed, among other kind of multimodal transportation, railroad transportation has become more pervasive. We are endeavoring to have more cooperation with South Railways in order to persuade freight forwarders and merchants by developing the infrastructure.
The general manager of Imam Khomeini Special Economic Zone Port said that Imam Khomeini Port has a long history in Iran that is the first port which used to be connected to the railways. "Imam Khomeini Special Economic Zone Port is an important hub for loading and unloading essential goods, such as cereals. Hence, it is a conducive distributing location for sending commercial products to populated areas and consumer societies.
0
Visit Home
Send to friends
Print
Newsletter
Share this news