The director of Kharg Island Ports and Maritime Organization stated: in the first two months of the current year,434 different types of vessels docked at Kharg Island , which this figure highlights a 35-percent rise in comparison with the same period in the last year. 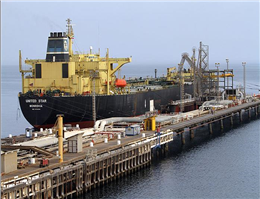 Referring to the increase in commuting foreign vessels to Kharg Island, MANA reported, Bahman Nakisa remarked: in the post-sanctions era, we are witnessing the remarkable and unprecedented presence of foreign vessels for carrying oil cargoes to news destinations , specifically European countries.
He continued: Iranian oil markets targeted countries like Dutch, France, Italy, Spain and Russia.
Pointing out to the export of 15 million tons of petroleum goods from Kharg Island, The director of Kharg Island Ports and Maritime Organization asserted: in the first two months of the current year, over 15 million tons of petroleum goods have embarked to different destinations, which this figure depicts a 67-percent ascent compared to the similar period in the last year.
Announcing the docking of 434 vessels in Kharg Island, Nakisa added:
This Island experienced the docking of 434 different types of vessels in the first two months of the current year, which 119 and 315 vessels had the capacity of above 1000 tons and below 1000 tons of capacity, respectively. this figure indicates a 35-percent increase compared to the same period in the last year, he added.
In the end, he stated: totally, the vessels from Kharg Island target ports in United Arab Emirate, Italy, Spain, Pakistan, Turkey, Japan, France, South Korea, Egypt, Dutch, India and Greek.
0
Visit Home
Send to friends
Print
Newsletter
Share this news