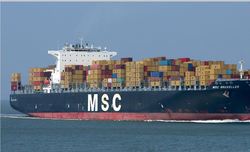 Law firm WFW has revealed further details of the financial arrangements behind MSC’s extensive scrubber retrofit programme. Work on Sinosure-backed transaction will be carried out by Chinese yards.

The company has agreed $439m in financing to install scrubbers on 86 container ships. Five banks will finance the loan

MEDITERRANEAN Shipping Co’s programme to retrofit scrubbers on 86 vessels will be funded by a $439m loan from banks including BNP Paribas, it has emerged.

As was already known, the transaction is backed by export credit guarantees from Sinosure, the statement confirmed.

MSC has previously confirmed it will fit scrubbers on its fleet of 23,000 teu newbuildings, and is also understood to be behind a $197m retrofit scrubber order placed with Finland’s Wärtsilä in July 2018.

MSC did not immediately respond to a request for comment.