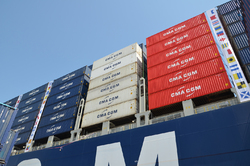 Nicolas Sartini, who successfully turned around the fortunes of APL, will take on the task of integrating CMA CGM’s logistics business into CEVA.

CMA CGM will sell logistics unit to CEVA as it seeks to boost its stake in the Switzerland-listed firm in an effort to transform its outlook.

Mr Sartini, a long-serving executive at the French liner company, was appointed chief executive of APL when it was acquired by CMA CGM in 2016 and was responsible for what is widely regarded as a successful transformation of the company.

He is currently an executive vice-president at CMA CGM, and was president of APL USA in 2016 and 2017.

In its updated strategy plan, CEVA said it would acquire CMA CGM Log, subject to regulatory approval, for $105m, with the deal set to close in the second quarter of 2019.

CEVA said the integration of CMA CGM Log into CEVA’s freight management business line was expected to “significantly reinforce” its footprint in ocean freight management, with 170,000 additional controlled teu, and would result in significant cost synergies.

Meanwhile, CMA CGM has published its pre-announcement for a public tender offer on CEVA shares to investors who wish to divest their stake in the company.

The French company is offering shareholders SFr30 ($30.10) per share, a 46% premium to the volume-weighted average share price of CEVA Logistics shares on the SIX Swiss Exchange during the 60 trading days prior to October 1.

“We are convinced of CEVA’s potential,” said CMA CGM chief executive Rodolphe Saadé. “This industrial project will make it possible to speed-up its transformation and to make it a more proficient leader of logistic, to the benefit of its clients, its employees and its shareholders.”

CMA CGM acquired a 24.99% stake in CEVA when the Netherlands-based company listed on the Swiss stock exchange in May. It has since boosted its holding to a non-controlling 33%.