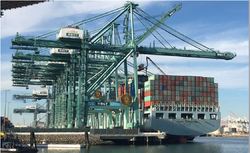 Global Shippers’ Forum chairman says there are no benefits for shippers from the current alliance system as service standards have fallen.

CONTAINER shipping under the current alliance system is restricting competition, falsely inflating pricing and failing to improve service standards for customers, according to the new head of the Global Shippers’ Forum.

“There is no benefit to shippers from the alliance system because it’s the same old ships but service standards have fallen,” Sean van Dort told Lloyd’s List.

The forum’s chairman said even though the container shipping sector was suffering from structural overcapacity, the alliance system enabled lines to create capacity crunches by withdrawing services, as seen on eastbound transpacific trades this year where rollovers have become common and rates have spiked.

“This is virtually cartel behavior and can lead to price fixing, so these are perilous times for the shipper,” he said. “When governments permit shipping lines to merge and then they ‘cartel out’ their agency network so three principal businesses are handled by one agency, for example, then there’s no competition and the dangers of them ‘carteling’ and price fixing are very evident.”

Under the current regime, Mr van Dort said SMEs were most adversely affected by surcharges and cargo rollovers because they had neither the high volumes nor the resources of big shippers to help negotiate better deals with lines.

“Large volume shippers are protected by long-term contracts — the majority of the big brands in this world have minimum volume commitments with the shipping lines and they are protected,” he said. “It is the small and medium exporter who does not have contracts who gets affected and who has to pay these charges and somehow stay in business.”

Mr van Dort, who is also director of Logistics and Digital Services Integration for MAS Capital and, until recently, chairman of the Sri Lankan Shippers’ Council, took the chair at the GSF earlier this year.

He succeeded Bob Ballantyne, chief executive of the Freight Management Association of Canada, who had been in the role since GSF’s incorporation in 2011.

With reliability levels of container shipping services regularly far lower than shippers would like, and cargo rollovers an ongoing problem, he said there was still relatively little that shippers could do to push for improved service standards.

“The shipping lines have never spoken to associations or shippers to ask how they can improve their services. They hide behind the forwarder or consolidator and they never engage us,” he said.

“GSF believes shipping lines are not transparent in their pricing. It’s the structure of the industry and the pricing mechanisms that’s at fault. We would like market conditions to decide pricing, simple as that. But lines don’t want that.”

He also told Lloyd’s List that the imposition of extra fees such as emergency bunker surcharges were applied without any cross-industry transparency.

He believes that because lines have hedging strategies on fuel, and each of these strategies is different, it then follows that any surcharges introduced to pass on the extra cost of fuel to shippers must also vary because the ‘cost’ to each line of higher fuel prices depends on the success of their hedging strategy.

“We’re looking at legal action about this,” he said. “The shipping lines don’t provide any rationale to explain these charges.”

He also claimed the assumption by lines that they would be able to pass extra fuel costs on to shippers when the International Maritime Organization’s global cap of 0.5% sulphur content comes into force in 2020 was misplaced.

“They have already started talking about it,” he said. “The low sulphur content is a bunker issue, but they already have bunker charges and bunker surcharges.”

While Europe abolished price-setting conferences in 2008, consortia regulations enabling lines to form alliances and vessel sharing agreements remained exempt from normal competition law. However, the consortia block exemption is reviewed every five years and, with the next review due in 2020, GSF intends to fight its continuation for a sector that uses it for “anti-competitive practices”.

“It should be removed; it should be open to free market policy,” said Mr van Dort. “This is the only industry that has this exemption now; why should they get protection?

“We vehemently oppose the extension of this and we will pursue this through our connections in the European Union, through the European Shippers’ Council and the Freight Transport Association. We will protest very strongly about this and get them to remove this protection.”