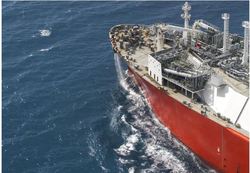 KEPPEL offshore and Marine has obtained two contracts of about $70m ($51.3m) involving two offshore floating units, according to a company release

That includes the conversion of a liquefied natural gas carrier into a floating storage and regasification unit and the topside module fabrication and integration of a floating production storage and offloading vessel.

Singapore based Keppel shipyard, the wholly-owned subsidiary of Keppel Offshore & Marine, will carry out the conversion process for a unnamed buyer, referred to as “a leading global operator of oil and gas production vessels,”

The FSRU will be capable of regasifying up to 750m metric standard cubic feet of natural gas per day, and is scheduled for delivery at the end of 2018.

Apart from repair and life extension works for the conversion project, Keppel will also undertake shipyard engineering, installation and integration of the regasification module and upgrading of the cargo handling system.

“For Keppel Shipyard, this is our fourth FSRU conversion contract and is part of our comprehensive suite of solutions for the gas value chain," Chris Ong, chief executive of Keppel O&M said.

The FPSO will be deployed at the Sepia field, which is located in the pre-salt region in the Santos Basin, 250 km off the coast of Rio de Janeiro, Brazil.