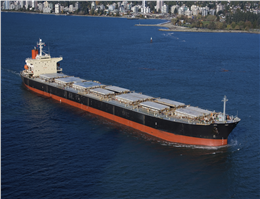 New Times Shipbuilding has won a contract for the construction of eight 63,000 dwt bulkers from Cyprus-based Frontmarine, according to Allied Shipping Research MANA correspondent reported.
The ships are slated for delivery in 2020 and are valued at USD 26.5 million apiece, pushing the total value of the deal to USD 212 million. The deal is said to include additional options.
Qingdao Wuchuan Heavy Industries has been tied to an order for up to eight 86,000 dwt bulkers. Chinese owner Fujian Guohang Ocean is said to be behind the contract, which includes three firm ships and options for five newbuilds, Asiasis said.
The trio is scheduled for completion in 2019 and is estimated to have fetched around USD 90 million in investment.
South Korean counterpart Hyundai Heavy Industries has reportedly won an order for two 400,000 dwt bulkers from compatriot Hyundai Glovis, while Japanese yards, including Tsuneishi, Sasebo Heavy Industries, and Mitsui Engineering nabbed orders for one small bulker each.
Separately, Chinese Chengxi Shipyard has been linked to an order for up to four 56,000 dwt tankers, placed by HK Kai Sheng International Shipping, data from Allied Shipping shows.
Under the terms of the deal, the Chinese yard will build two tankers, scheduled for completion in 2019 and 2020 respectively. Two additional units are optional.
The newbuildings are priced at around USD 30 million apiece.
0
Tags: Shipbuilding china newbuilding bulk carrier
Visit Home
Send to friends
Print
Newsletter
Share this news