Chinese Purchases of Overseas Ports Top $20bn in Past Year

China is ramping up acquisitions of overseas ports as it expands its reach as a maritime power, doubling its investments over the past year to $20bn and pushing ahead with plans to open new shipping routes through the Arctic circle. 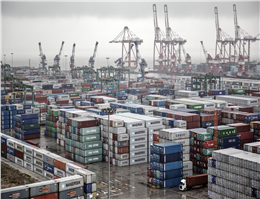 The locations of the ports in which China is investing cluster around three “blue economic passages” that Beijing named in June as crucial to the success of “One Belt One Road”, a grand scheme to win diplomatic allies and open markets in around 65 countries between Asia and Europe, reported by MANA News Agency.
A study by Grisons Peak, a London-based investment bank, found that Chinese companies have announced plans to buy or invest in nine overseas ports in the year to June in projects valued at a total of $20.1bn. In addition, discussions are under way for investments in several other ports, for which no value has been divulged.
This level of activity represents a sharp acceleration from the $9.97bn in Chinese overseas port projects in the year-ago period, according to Financial Times estimates.
“In the past year, China has now announced all three of its blue economic passages, so it is not surprising to see this significant level of increased investment in ports and shipping,” said Henry Tillman, chief executive of Grisons Peak.
The importance of one of the three maritime routes, which runs from China to the Indian Ocean and then on to the Mediterranean, shows up clearly in the newly announced investments.
Four separate initiatives are set for Malaysia, with Chinese company investments scheduled for the $7.2bn Melaka Gateway, the $2.84bn Kuala Linggi Port, the $1.4bn Penang Port and the $177m Kuantan port projects, according to company announcements.
In Indonesia, Ningbo Zhoushan Port plans to invest $590m into the Kalibaru project, an expansion of Tanjung Priok, the country’s largest port.
Jing Gu, an expert at the Institute of Development Studies at Sussex University, said the focus on Southeast Asia represented an example of Beijing’s efforts to create “good neighbourly” relations in the region. “However, it is also rather controversial with continuing issues over territorial sovereignty and over China’s economic strength and its resources needs,” added Ms Gu, director of the university’s Centre for Rising Powers and Global Development.
The maritime route from China to Europe via the Arctic Ocean, which could cut the journey time by several days, is also attracting attention. One planned project involves a deepwater port near Arkhangelsk, on Russia’s White Sea, and a railway deep into Siberia.
A plan by Poly Group, a Chinese state-owned enterprise, to lead investment in both the port and railway received new impetus this spring with a visit to Arkhangelsk by Wang Yang, a Chinese deputy premier, Chinese officials said.
Klaipeda, a Lithuanian port and feeder for Arctic route traffic, has attracted investment proposals from China Merchants, a port operator, to build a large new container port. Talks have also taken place over potential Chinese port investments at Kirkenes, a Norwegian port on the Barents Sea, and at two ports in Iceland, according to people close to the discussions.
Some of China’s port investments raise questions over whether Beijing is pursuing an undeclared strategic agenda in the guise of pursuing commerce, said Jonathan Hillman, a director at the Center for Strategic and International Studies.
“Strategically, port ownership opens the door to non-commercial activities like hosting military forces and collecting intelligence, said Mr Hillman. “But aside from grand strategy, there’s also lowly politics. Interest groups in China and partner countries are eager to participate in new projects, and now they can do so under the expansive banner of China’s Belt and Road initiative,” he added.
0
Tags: china investment One Belt One Road SILK ROAD
Visit Home
Send to friends
Print
Newsletter
Share this news