Geopolitics and Regulations – Twin Headache for Bunkers in H2 2017

The global bunker industry will most likely witness steady to slightly lower demand in the second half of 2017, extending the trend that the market witnessed in the first six months, as the industry battles with the twin woes of bulging overcapacity as well as a plethora of new regulations. 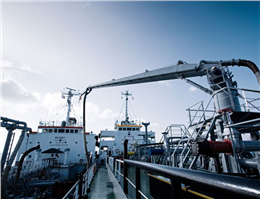 While the industry sails through choppy waters, positive news from the demand side at some bunkering ports offers support sentiment to some extent. In addition, recovering crude oil prices — ICE Brent crude oil futures had rebounded from the year’s low of $44.80/b — are expected to offer some respite to the industry which has been struggling with feeble margins, MANA correspondent reported.
“Some challenges are expected,” Bob Thornton, technical director of marine fuel at World Fuel Services, told the Platts Inaugural Bunkering and Storage Asia conference last week. “A lot hinges on suppliers’ and shipowners’ decisions in the next two years and more, as no single solution fits all,” he said.
Singapore, the world’s largest bunkering port, has seen strong bunker demand since the beginning of this year. Singapore’s bunker sales over January-May rose 3.9% year on year to 21.08 million mt, averaging 4.22 million mt/month, according to data from the Maritime and Port Authority of Singapore.
Bunker sales in Singapore could grow during rest of this year, but that increase is expected to come by means of displacement of demand from some other ports, sources said.
LONG LIST OF REGULATIONS
Market participants will be searching for answers on how the industry will adapt to the long list of regulatory changes that are planned at a time when the demand outlook is not looking very promising.
Regulations, such as the International Maritime Organization’s Ballast Water Management Convention, scheduled to enter into force from September 8, will likely encourage more vessels scrapping but it would not be enough to curb excess supplies, delegates attending the conference said.
However, there is a possibility that the Convention’s entry into force could get postponed by a couple of years, delegates added. underway this week.
The BWM is only one among many of the upcoming regulations and changes which the industry will be facing.
Although IMO’s global sulfur cap rule would not kick in until January 1, 2020, bunker suppliers and shipowners are waiting for more clarity on fuel specifications as they prepare to greet a range of bunker fuel grades and hybrids, which would add to the complexity in marine fuel management.
There are also questions around compatibility of ultra low sulfur fuel with other products.
“Fuel quality issues are here to stay and you really need to manage it,” said Rahul Choudhuri, managing director of Veritas Petroleum Services in Singapore. “These issues are no longer localized but have become a global phenomenon.”
IMPACT OF GEOPOLITICS, TECHNOLOGY
The recent geopolitical tensions — North Korea’s ballistic missile tests and the recent diplomatic spat between Qatar and its Middle Eastern neighbors — could support crude oil prices, which in turn would trickle down to bunker prices, some sources said.
“We believe that the onslaught of shale oil production in the US has had a big part in the downward pressure on crude oil prices. We have seen an overly and unreasonable bearishness in the market. This is not a reflection of what fundamentals should be,” said Priya Narain Balchandani, director, global research at Standard Chartered Bank.
Technology is also becoming a critical component for the bunker industry.
From January 1, Singapore became the only port in the world to mandate the use of mass flow meters for bunker fuel deliveries.
MFMs measure the flow rate in the pipe, gauging the quantity as well as the mass and density of the bunker fuel passing through.
0
Tags: bunkering fuel singapore 2017 Asia
Visit Home
Send to friends
Print
Newsletter
Share this news