SHELL’s liquefied natural gas bunkering vessel is on its way to Rotterdam from Asia, marking a new maritime venture for the energy major. 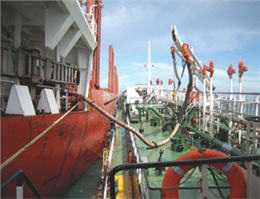 According to MANA, The 2017-built, 6,500 cu m Cardissa — said by Shell to be the largest LNG bunkering vessel in the world — is currently about 100 miles off the coast of Sabang, Indonesia, according to ship tracking data from Lloyd’s List Intelligence.
It left STX Offshore & Shipbuilding’s yard in South Korea on June 8, stopped in Singapore on June 17, and left Singapore on June 20, according to the ship tracking data.
The vessel will load LNG from the third berth at the Dutch Gate LNG terminal in Rotterdam and deliver it to LNG-powered ships in northwest Europe.
Shell is putting its considerable weight behind LNG as a bunker fuel. Just over a week ago, the energy major signed a framework agreement with Qatar Petroleum’s Wave LNG Solutions to develop LNG bunkering infrastructure at strategic shipping locations across the globe.
The rationale for Shell was that increasing numbers of shipowners and operators are turning to LNG over traditional marine fuels in response to tighter sulphur and nitrogen oxide emissions regulations.
“As two of the world’s leading LNG suppliers, Shell and Qatar Petroleum have the capability and experience to deliver LNG as a marine fuel to shipowners and operators who must meet tougher emissions regulations from 2020,” said Shell chief executive Ben van Beurden.
That particular agreement followed two Memoranda of Understanding that Shell and Qatargas signed with industry partners in 2016 to explore LNG bunkering opportunities in the Middle East.
However, the market for LNG-fuelled ships is still extremely small. Highlighting this, there are around 100 LNG-fuelled ships in operation, and 91 LNG-fuelled ships on order, out of about 55,000 ships in the global shipping fleet.
0
Visit Home
Send to friends
Print
Newsletter
Share this news