Maersk Line has posted a first quarter loss of $66m, reversing from the profit of $37m in the year-ago period, as the carrier was hit by higher bunker fuel costs. 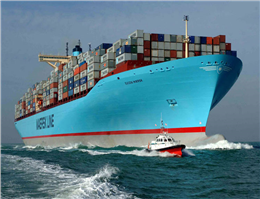 According to MANA, the container carrier said that despite freight rates increasing by 4.4% year-on-year during the first quarter, they did not fully compensate for the 80% spike in bunker price.
Freight rates mainly increased on East-West trades and especially from Asia to Europe while North-South trades were below last year.
“Global container demand grew nearly 4% in 2016, and strengthened towards the end of the year,” Maersk Line stated.
“The momentum continued into Q1 2017, with global container demand of around 5% year-on-year, reflecting improvements in the global economic environment,” it said.
The first quarter revenue for Maersk Line was recorded at $5.49bn compared to $4.97bn in the previous corresponding period.
0
Tags: maersk sink loss
Visit Home
Send to friends
Print
Newsletter
Share this news