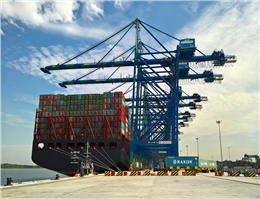 “The industry will go through a recalibration process as the shipping lines adjust to different routes and different alliance partners. I would give it 15 months before the dust fully settles to get a clearer picture of container growth,” Gnanalingam told reporters after the company’s annual general meeting on April 25, reported by MANA correspondent.
In 2016, the port operator saw a 10% increase in its container volumes by handling 9.95 million TEUs, against 9.05 million TEUs in 2015.
However, this year will be challenging for the group’s terminal at Port Klang as two of its biggest clients, CMA CGM and United Arab Shipping Company (UASC) are members of new alliances, according to Westports’ CEO.
The Ocean Alliance, comprised of CMA CGM, China Cosco Shipping, Evergreen and Orient Overseas Container Line (OOCL), and launched in early April, will use Westports as the regional transshipment hub.
In mid-2016, the group completed the Container Terminal 8 (CT8) Phase 1 expansion. The latest CT8 Phase 2 expansion is on schedule, and the additional 300-meter wharf facility is expected to be completed by mid-2017.
In the second half of 2016, the Container Terminal 9 (CT9) Phase 1 commenced due to high utilization of existing container terminal facilities at Westports. Expected to be completed by the end of this year, the CT9 expansion will encompass the construction of a 600-meter wharf and additional equipment such as STS and additional RTG cranes.
“For Westports, the completion of phase one of container terminal nine (CT9) would bring its annual container handling capacity to about 14 million TEUs by year-end,” Gnanalingam added.
Separately, the Star reported that Westports plans to invest RM 800 million (USD 187.8 million) in its port expansion this year. The investment covers the construction of the CT8 Phase 2 wharf and a container yard as well as the construction of the CT9 wharf.
0
Tags: alliance Container Volume malaysia 2017
Visit Home
Send to friends
Print
Newsletter
Share this news