Hong Kong-based container carrier Orient Overseas Container Line (OOCL) has had an encouraging start to the year as it reported an increase of 7 percent in its total volumes during the first quarter ended March 31, 2017. 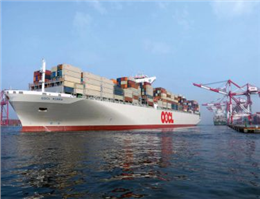 The company handled 1.47 million TEUs during the quarter, compared to 1.37 million TEUs seen in the same period a year earlier, MANA correspondent reported.
Of the total volume, the company reported 393,469 TEUs carried on the Trans-Pacific route, representing an increase of some 20 percent from the corresponding quarter in 2016.
OOCL handled 17 percent more on the Asia/Europe route, reaching 251,289 TEUs, while the Trans-Atlantic route saw an increase of 4 percent handling 100,861 TEUs in the three-month period.
The company’s volumes slightly dropped on the Intra-Asia/Australasia routes, as the company handled 1.6 percent less with a total of 724,398 TEUs in these services.
Additionally, OOCL said that its total revenues for the period increased by 6.4 percent, ending the quarter at USD 1.18 billion compared to USD 1.11 billion reported for the same period in the previous year.
The increase in revenues was mainly driven by the strong revenues seen in the Asia/Europe routes, which jumped by 28.9 percent to USD 227.2 million, according to data provided by the carrier.
Overall average revenue per TEU decreased by 0.6% compared to the first quarter of last year, OOCL said, adding that its loadable capacity increased by 0.9 percent and the overall load factor was 5 percent higher than the same period in 2016.
0
Tags: oocl Container Volume Hong Kong 2017
Visit Home
Send to friends
Print
Newsletter
Share this news