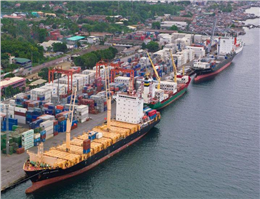 According to MANA, MAJOR investment in transport infrastructure will boost the Philippines’ economic growth and enable new links to neighbouring countries and between the country’s islands, according to a key government power broker.
In April a new ro-ro service will be launched linking the port of Bitung in Indonesia to the ports of Davao and General Santos in the Philippines. Mr Tugade said this would just be the start of “a golden age for infrastructure” and transport that would boost economic growth, trade and prosperity.
He told delegates the government had committed $140bn to a six-year infrastructure investment programme that would see the construction of new road and rail links in Luzon, including to the ports of Manila, Batangas and Subic Bay. Congestion in Manila would be reduced by building up barge connections between Manila and Batangas.
0
Tags: philippines Multipurpose Shipping railroad transportaion
Visit Home
Send to friends
Print
Newsletter
Share this news