A 41-year-old very large gas carrier (VLGC) in the fleet of Singapore’s LGT Shipping has been sold for demolition. 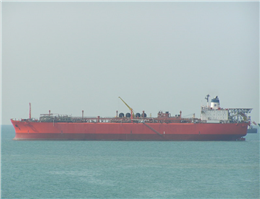 According to MANA, The 80,000-cbm Gas Concord (built 1976), believed to be the world’s oldest VLGC still trading, has been sold to India for $343 per ldt, or $5.9m.
Naftomar of Greece sold the vessel to LGT in 2004 for $8.8m. The Kawasaki Heavy Industries-built Gas Concord was LGT’s only vessel.
Penta Ocean Ship Management has also sold an LPG carrier for demolition. The 3,200-cbm Turk Gaz 1 (built 1989) has gone to India for an undisclosed price. Penta has another vintage gas carrier, the 11,600-cbm Russell (built 1989).
TradeWinds is told that US-listed DryShips has chartered its first VLGC unit to oil major Shell. It was acquired from Christos Economou-founded TMS Cardiff Gas for $83.5m after DryShips declared a purchase option.
The ship, which is due for delivery from Hyundai Heavy Industries in June, has been taken for five years at $912,000 per month, with three one-year options.
DryShips has an option to buy three sisterships at the same price. They are also fixed long-term, presumably to Shell.
0
Tags: VLGC Demolition
Visit Home
Send to friends
Print
Newsletter
Share this news