KEPPEL Offshore and Marine's offshore shipbuilding unit Keppel FELS has signed a settlement agreement for the sale of a KFELS B Class jackup rig. 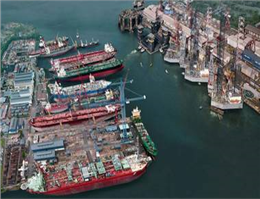 According to MANA, The rig was originally to be delivered to Parden Holding SRL which made the order on August 2, 2013.
However amid the prolonged weakness in crude oil prices, Parden was unable to take delivery or make payment for the balance 80% of the rig's contract price.
Under the new sales deal, the rig is expected to be delivered in the fourth quarter of 2017.
Keppel Offshore and Marine reduced headcounts by about 3,080 in the third quarter, including 660 in Singapore and 2,420 overseas with profits collapsing as newbuilding demand dried up.
The unit posted net profits of S$11m (£7.9m) on revenues of S$516m for July to September, compared with net profits of S$166m on revenues of $1.4bn in the same period of last year.
In January-September, Keppel O&M cut the number of direct employees by close to 8,000 in total, or 26% of the overall labour force.
0
Tags: Keppel shipbuilding rig deal
Visit Home
Send to friends
Print
Newsletter
Share this news