VesslesValue senior analyst William Bennett has compiled a report on the top consolidated container fleets. Currently these top five fleets are worth $33.4 billion and account for 33 percent of the entire container fleet. 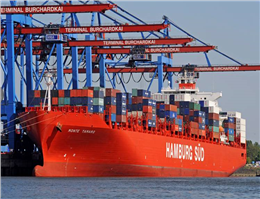 According to MANA, Maersk have confirmed rumors that they will acquire German container shipping line Hamburg Süd. Hamburg Süd’s strong position in north-south trades will complement Maersk's current business.
China COSCO Holdings Co
The Chinese state cabinet approved the merger of COSCO and China Shipping back in December of 2015. The merger is a part of plans to create stronger, larger national entities that have greater competitive advantage and prevents the two lines from competing against one another. The Chinese owned container fleet is the most valuable at $17.6 billion and accounts for around 17 percent of the market.
CMA CGM/APL
The largest acquisition in the French giant's history, CMA CGM acquired Singaporean company, NOL, best known for its APL brand. Recently it was also confirmed that APL would join CMA CGM in the Ocean Alliance which will subsequently represent 14 percent of global container capacity, second only to the 2M alliance.
Hapag-Lloyd/UASC/CSAV
Hapag-Lloyd completed their integration of Chilean line CSAV earlier this year. In July, they continued their growth by signing a merger agreement with UASC.. Hapag-Lloyd and UASC will be the fourth most valuable fleet up from 10th and eighth, respectively.

MOL/NYK Line/K Line
One of the more recent mergers to be announced is that of MOL, NYK and K Line. Only the container businesses of these companies will merge and the consolidation is expected to be complete by 2018. The new arrangement makes the merged entity the fifth most valuable at $5.1 billion.