Strong demolition has been a prominent feature of the shipping industry this year, as challenging market conditions continue to drive a significant supply-side response in a number of sectors, according to Clarksons Research. 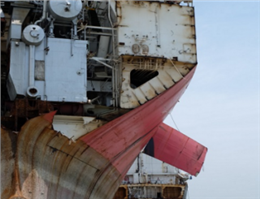 According to MANA, As conditions in most sectors were under pressure, 2016 has been an extremely difficult year for the shipping markets. Reflecting this, demolition has remained at elevated levels, and in January to November, 841 vessels of 41.3 million dwt were scrapped.
Demolition so far this year has already exceeded last year’s total of 38.9 million dwt, and whilst scrapping volumes have picked up in most sectors, some markets have played a more important role in this year’s tally than others, Clarksons said.
385 bulkers of 27.7 million dwt have been scrapped in the year to date. Bulker demolition has been historically firm since 2011, but the pace of scrapping in most bulker sectors this year has still exceeded the 2011-15 average.
0
Tags: Bulkers Scrapping New Record Set
Visit Home
Send to friends
Print
Newsletter
Share this news